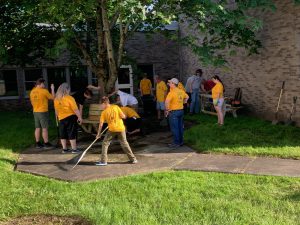 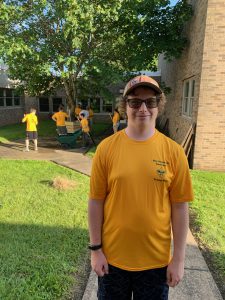 From his freshman year, Shain Krutz, who will be a fourth-year HFM PTECH student this fall, envisioned his school’s courtyard as a place for students to work independently, collaborate on projects and to simply get outside during the school day. So, he set out to create just that, making it his Eagle Scout project.

The ideas for his project started flowing during his first year at PTECH. As time went on, Krutz formalized the plans for an outdoor classroom in the courtyard of the Jansen Avenue School, where PTECH is housed.

“I had to get approval of the design and plans from the Eagle Scout Council,” said Krutz, who is a member of Troop 5051 out of Broadalbin. With sports and balancing his schoolwork, it was about a year before he had the stamp of approval and moved into the fundraising phase.

Krutz carried out a bottle and can drive for about a year to raise money for materials, which he projected would cost about $1,000.

“Five cents here and there really does add up,” he said, adding that he also approached businesses for help, and Tanner Lumber in Broadalbin stepped in to donate a good portion of the wood he needed.

In addition, Noble Ace Hardware in Johnstown donated the hardware needed for the project.

Last month, just before school let out for the summer, Krutz and more than a dozen fellow Scouts descended on the Jansen Avenue School grounds to assemble and install several folding benches that can be made into tables, as well as permanent benches around a tree in the center of the courtyard and wooden flower boxes under the windows. “We have a plan to keep the plants watered during the school year and in the summer,” Krutz said.

In total, Krutz’s project adds seating for about 25 to the space.

“This went from a dream from when I first crossed into Scouting to reality,” he said. “Now, as senior patrol leader, having younger troop members come and help me, it was amazing seeing it come full circle where I’m the one doing the Eagle Scout project.”

Although as a fourth-year PTECH student Krutz will spend his school days at Fulton-Montgomery Community College campus and not at the Jansen school, his vision for the outdoor classroom extends far beyond his time there.

“The kids at PTECH will be able to enjoy it for years to come,” Krutz said.