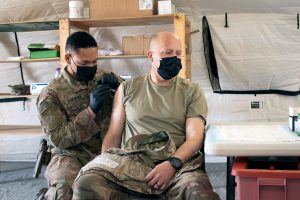 Sgt. Ryan Kamanu of Amsterdam administers a COVID-19 vaccine to the senior-most enlisted soldier at Al Asad Air Base, Iraq. Kamanu was one of the first to complete the HFM PTECH program, graduating in 2018.

Ryan Kamanu of Amsterdam was among the first to earn his high school diploma and associate degree from the HFM Pathways in Technology Early College High School in 2018. Now as a healthcare sergeant in the Army serving in the Middle East, the 21-year-old often draws upon the experiences that brought him success in the PTECH program.

“PTECH taught me how to be creative, improvise and think outside the box in the face of failure and how to always chase the next best thing,” he said. “Even if something seems unlikely, I always feel where there’s a will, there’s a way.”

Dozens of students like Kamanu, from Amsterdam and other school districts across the Hamilton-Fulton-Montgomery region, have attended and completed the HFM PTECH program since it opened in 2014. Data from the first two classes of enrolled students show high school and college graduation rates significantly higher than national averages.

“The HFM PTECH program focuses on supporting students on their path to high school graduation and earning an associate degree,” Principal Matt Davis said. “The high graduation rates from our program are a testament to the hard work of our students and to the dedication of our staff in supporting them.”

The high school graduation rate for the first class to enroll in HFM PTECH in the 2014-15 school year was 98%, and it was 100% for the second class that entered in the 2015-16 school year. The program, which is partially funded by state grants, is now in its seventh year of operation. So far, 72 students have earned their associate degrees at no cost to their families, and about 40 more are expected to complete their degrees this spring.

The percentage of HFM PTECH students who complete their associate degrees also surpasses the national average. Data from the National Center for Education Statistics shows that nationally only 13% of community college students graduate in two years. Within three years, approximately 22% of students graduate.

Students commit to the program as eighth-graders and begin taking college courses from their freshman year. “We offer students the opportunity and resources to earn a college degree at no cost to their families. We appreciate and value the partnerships with FMCC, SUNY Cobleskill, and the FM Chamber of Commerce,” HFM BOCES Assistant Superintendent for Student Programs Jay A. DeTraglia said. “The pace is fast and the workload demanding, but we can see by our graduation rates that the supportive PTECH environment carries many advantages for our students who are committed to the challenge.”

Kamanu, who has been deployed about 9 months and still manages his business as an online personal trainer, plans to return to college in the fall to pursue his bachelor’s degree in biochemistry and then apply to physician’s assistant school.

Though some like Kamanu pursue other opportunities before continuing their education, many choose to return to school right away. In the first class of students, 67% went on to pursue their 4-year degrees. In the second group, 52% continued on to work on their bachelor’s degrees.

Julia Preston of Johnstown was a member of the second class that entered HFM PTECH. After earning her associate degree in Business Administration from FMCC, she enrolled at SUNY Geneseo, where she is pursuing her bachelor’s degree with an eye toward continuing on to law school. “For the past few years and even at PTECH, I had my heart pretty set on some sort of law profession, and that thought has developed into the possibility of working for the FBI in the future,” she said.

Preston said entering SUNY Geneseo with her associate degree from FMCC has given her not only financial relief, but also credit relief. “I’m leaps and bounds ahead of many of my peers at Geneseo in terms of credit fulfillment, and not having that stress of piling on business and English classes is a really huge help for me right now as I apply to internships and start to study for the LSAT,” she said.

Many of the students who chose to leave PTECH before earning their associate degree have gone on to pursue their degrees at four-year colleges. In the first class, 32% of those students remained enrolled in college after leaving PTECH. In the second group, 12% continued their education.

A student in the first HFM PTECH cohort, John Pomeroy of Gloversville was a few credits shy of completing his associate degree at FMCC but decided to take the many credits he had earned and transfer to Sacred Heart University in Fairfield, Conn. In two years, he earned his bachelor’s degree in marketing.

“PTECH set me up for success to finish my degree early and gave me the opportunity to start my career sooner,” he said.

Attending PTECH was a good decision for financial reasons, he said, but the project based learning gave him skills he is finding helpful in the corporate world. Pomeroy now works locally as a real estate agent, but plans to begin working toward his master’s degree in business administration in the near future. He hopes to eventually land at a marketing or advertising agency.

About 30% of those who complete the program go directly into the workforce after graduation, with about half of those working in a field that relates to their degree. PTECH’s partnership with the Fulton Montgomery Chamber of Commerce provides students with professional skills development and workplace experiences, as well as support after graduation. “Whether they utilize the connections they established with our local business partners once they have their associate degree or once they’ve earned their bachelor’s degree, the PTECH network is available to them,” Workforce Development Director Nicole Walrath said.

Application review for the next class of PTECH freshmen is underway, and HFM BOCES remains committed to admitting students in the region for whom the program is a good fit.

“Early college programs such as PTECH are transformational opportunities for young people who may not have recognized that college may be a path for them,” HFM BOCES District Superintendent Dr. David Ziskin said. “I’m proud of our successful support of students who may have faced challenges and barriers to school success but are now achieving at high levels.”