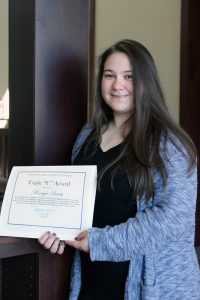 HFM PTECH student Monique Beam has been awarded the New York Attorney General’s Triple ‘C’ Award in recognition of the strength of her character, courage and commitment to bettering herself and her community.

Beam, a Canajoharie school district student, is in her fifth year of the Hamilton Fulton Montgomery BOCES Pathways in Technology Early College High School program. She expects to graduate from Fulton Montgomery Community College with her degree in Electrical Technology in May 2020. After graduation, she plans to pursue her bachelor’s degree and ultimately hopes to work in the field of robotics.

In her nomination of Beam for the Triple C Award, teacher Jennifer Drake pointed to Beam’s ability to approach the unknown fearlessly. “Monique does not allow fear and apprehension to dampen her learning process and is excelling in a typically male-dominated pathway,” she said. Drake also pointed to Beam’s commitment to the program. “She mentors others, volunteers for activities at FMCC and PTECH, stays optimistic when faced with difficult obstacles, and displays endurance — performing her best even under pressure.”

Beam said the time she spent participating in PTECH’s Underwater Robotics program taught her a lot about perseverance because she and her teammates often had to troubleshoot their way through technical difficulties during competitions.

Beam admits that before attending PTECH, she wasn’t as successful in school. Her commitment to family and her future has been a driving force behind her success.

“I’ve buckled down and tried my hardest because I know my future depends on it,” she said. “By persevering and getting an education, I’ll be able to do more for my own kids.”

In addition to Underwater Robotics, Beam has participated in archery competitions for the past five years.

“I like competition,” she said. “It allows you to see improvement. It’s not all about winning; it’s about progress.”