A group of students at Foothills PTECH has launched a peer awards program to honor their fellow students for the positive things they add to the school environment.

“We wanted to make them feel that people care about what they do,” freshman Ondriana Nichols said of her fellow students. “The spotlight needs to be on students who are selfless and put others before themselves.” 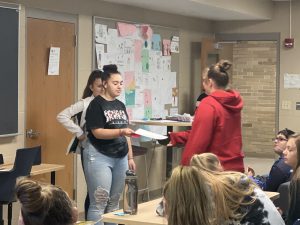 Sophomores Aaliyah Sistrunk and Petra Conyne had been developing the idea and decided to bring it to Student Council.

“We thought it was a great idea because some of our peers need a boost, and it can inspire them to be the best version of themselves,” Student Council President Logan Harvey said.

The nature of the awards, which are given to one ninth-grader and one 10th-grader every other Thursday during the morning meeting at the start of the school day, are based on the individuals who are receiving them. So far, students have been recognized for such traits as passion, leadership and creativity.

“You don’t have to be in certain clubs or have a certain label,” Conyne said of the award recipients. “You can be who you are.”

Harvey, a sophomore, said he thinks the awards are having a positive effect on Foothills PTECH students.

“You can see some students are now trying to get the awards and are pushing themselves,” he said.