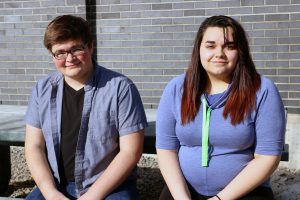 Conner Hutchinson and Jasmine Tate each work as the desk receptionist at HFM BOCES on alternating afternoons.

If you visit or call HFM BOCES any weekday between 3 and 5 p.m., you’ll likely be greeted by one of two HFM PTECH students who man the front desk and phone on alternating afternoons.

Jasmine Tate, a 17-year-old senior from Gloversville, and Conner Hutchinson, a 17-year-old junior from Amsterdam, were selected for the after-school desk receptionist position after a competitive application and interview process this fall and began working in January.

“It was all very professional – and kind of intimidating,” Hutchinson said.

As part of their job, Tate and Hutchinson answer the phones, buzz people in through the front doors and answer questions when people call or visit.

“It’s generally a quiet time, so I can work on my homework,” Hutchinson said, adding that when people do call or need his help, he feels a sense of urgency to help them.

Tate agreed. “I don’t like making people wait,” she said. For her, the most important aspect of the job is that it’s helping to polish her phone skills, something she knows will be valuable at any job she has in the future.

Both say they are happy to have a paying job that fits so well with their school schedules.

“It’s also very good to be able to put on a resume for future jobs,” Tate said.

While Hutchinson still has another year of PTECH, Tate is poised to graduate this spring with both her high school diploma and her associate’s degree in Health Studies from Fulton Montgomery Community College. She plans to continue her education at SUNY Buffalo to eventually get her master’s degree in psychology.